Today morning I was reading about Brad Adams – Going Google and ruminating about what he wanted to do there when several earlier articles I had read suddenly came together and I had an inspiration that I thought I’d blog.

It would by really cool if Brad and Tim Bray (who recently left Sun and joined Google Android) get together and implement the CLI on the Android OS.

Brad is one of the architects of the CLI and has been one of the main driving forces behind the development of the .NET framework and it’s adoption. He is currently looking at what he wants to do when he starts at Google. He mentioned that he thinks the cloud plus devices is one of the dominant trends of the future and I agree.

I think the Android OS is an important part of this future and currently I am frustrated that there is only Java support for developing in it. Tim shares my frustrations and he is looking at getting other languages supported in the Android OS.  He is looking at Ruby right now – it’s open source and a dynamic language and it makes sense . But I feel the CLI (which is an open ECMA specification) is a great fit for the Android OS because it can be used to as a basis to quickly support a lot of languages.  Besides as a .NET developer myself, I think that having the capability to develop Android applications in C# or IronPython is a far more palatable proposition than doing it in Java :-)

I saw this article by Miguel de Icaza where he puts out an idea to incorporate the CLI into the browser engine so that we could use languages other than Javascript in our client-side scripting (my take on that is here). It occurs to me that it should be similarly possible to bring it into the Android OS as well.  There are currently efforts to port Mono that could be used as a starting point.

So what say guys – can we get the .NET CLI in Google Android ?  Become the opposite of the Apple iPhone and embrace developers instead of driving them away :-)

So finally after all the rumors, speculation and denials – it’s out there in black and white – Google has announced the Google Chrome OS .
This has led to a flurry of speculation of course the biggest being the impact on Microsoft (check out this cartoon by Federico Feini – :-) ) 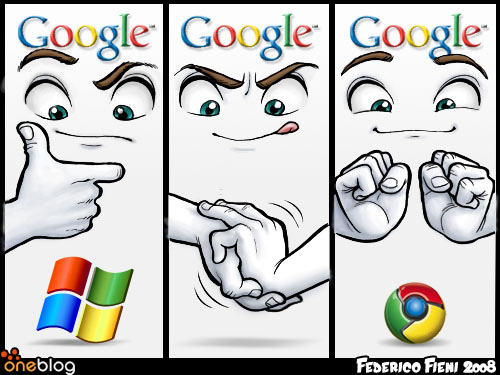 I am for one am going to follow this with much interest and keep my fingers crossed that it works out. If this is anything like Google Chrome – I would be willing to install it and give it a fair shot at becoming my default OS. that being said there is still a long way to go and quite a bit of competition too – especially given that it’s going to be a flavor of Linux, which we know does not suffer from a lack of flavors :-)

I noted in a post at the beginning of the year that Google had pulled the plug on several projects. It was named Google hunkers down.

Well it looks like that was just a breather – a clearing of the slate for the big guns – Google is back !!

Oh and by the way – Google Apps (GMail, Google Docs, Google Calendar and GTalk) is out of beta :-) This seems more to satisfy the paying customers than any new release of functionality :-)

Check out the Google Wave – this is AWESOME stuff and when it comes out could transform your social media universe completely. You simply have to see the video (it’s a little long) to believe it – instant messaging that’s truly instant, collaboration in real-time…. here is an abridged version of the unveiling –

The other reason why I think it’s so cool is that Google is borrowing a page from Microsoft and involving developers. The Google Waves are extensible and the communication protocol used is open source , there are APIs available for developers as well as a sandbox environment where developers can try out their code. You can even set-up your own Google Wave server – which is really cool when you start thinking of enterprises and the possibilities of collaboration there…  It’s insane I tell you –  the only catch is – it’s not available yet.  It’s in private beta – you can sign up to be informed when it goes public – wonder when mere mortals like me can play with it.

So the Google machine is finally slowing down a bit… With the economic recession and slowing revenue growth – Google is no longer the darling tech stock that it once was. The blitzkrieg approach is showing signs of the strain and Google has been taking a long hard look at it’s core business and has started shedding some of it’s fat.

It started out with cutting the famed perks – the free food and fancy services, then it moved to cutting down the contractors and then they let go about a 100 employees.

All these are good steps and they portray a company that is mature enough to realize that sometimes tough steps need to be taken and pragmatic enough to take them.

Google has had an image as a naive, starry eyed dreamer – these steps will puncture that image. But, then I would rather have Google surviving the hard times at the expense of it’s naive image than it failing because of it. In the end the company makes great software and there are too many people – myself included who use it’s software every day and would miss it if it were to go away.

I can live with a few less Google Products if I can continue to get the ones that I use everyday ;-)

So here I am minding my own business when I browse to one of my favorite web-sites UserFriendly and the featured link of the day is… Well check it for yourself – The Church of Google.

Now personally, I think this is a one of those ultimate sarcastic jokes – You know the ones, where you create this elaborate scenario and setup and when you deliver it – you realize – there are people that actually believed you and took all that crap seriously !! At this point of realization – different people act in different ways :-

I leave it to you to laugh, or vent about the Googlism, its ideology or its proofs. As far as I am concerned I have seen this particular joke before and its supporting arguments and counter-arguments. I had this discussion once with some friends of mine on alternative religion and they showed me this. The Church of the Flying Spaghetti Monster is an obvious parody (and I really love some of the stuff they pull) but it is one designed IMO, to prove certain points about the abstract nature of religion. However, The Church of Google is IMO a parody of attempts to scientifically prove religion exists which is a much more controversial contention, in my mind. I am certainly going to be keeping an eye out for these guys, though I find it interesting that so many people actually search for the term ‘Google’ on Google (all sort of delicious recursive paradoxes come to mind :-) at that phrase)

I admit – I admire Google – the company, their innovation, their approach and their unique ability to leverage their chosen battleground. This has been reflected in the posts that I have done about them. However, I think of them more as a bunch of really smart people with a innovative idea of automating technology at scale.

And that’s all I have to say about The Church of Google :-) If you are interested The Church of the Flying Spaghetti Monster has a gospel, and they celebrate a holiday.

Update:  Now here is an interesting contrast to the Google worship of The Church of Google. Cory Doctorow wrote a short story of what could happen if Google went to the dark side.

I have been noticing some subtle and not so subtle changes happening over at Google for the past few days now. Google’s personalized home page has been renamed to iGoogle – search results has started appearing subtly different with new groupings and they had started putting more links in the classic Google Home Page. To illustrate what I mean check out this search for Jon Stewart – notice the bar showing all the different searches.

I was initially thinking, that this was simply another refining of the search experience and I thought I’d blog about it when I when I saw this announcement at the Google blog.
They have done, what – despite the looks of it – is a pretty big revamp…

Its called Universal Search – and it promises to be a merging between textual search and rich media search that should rock the search engine world and put even more distance between Google and Yahoo (Microsoft is still a distant third IMO). They are calling it the first move in pretty big re-design of their search engine, with a goal towards providing a universal search across all types of content – web, news, images, books, video, blogs, etc. This implies that now not only does your search entries return results for relevant web-links but also relevant new stories, books, blog entries and if relevant videos. From the UI point of view the user sees a white vertical navigation bar that groups the results by category. Vertical search companies better watch out – if Google can pull this off they are in trouble.

It finally reveals the strategy behind Google’s purchase of YouTube – more fodder for the search monster :-) Apparently not enough though since Google has also announced that their video search is going to search against the collections of other properties also.

Another major product or rather a new area is Google experimental. This is an area where new enhancements to the Google Search page is available for people to try out. I especially like the timeline feature and the keyboard shortcuts feature.

From a company that basically started out as a by-product of the research in data mining and web search, done by a couple of Stanford students – Google has grown extremely fast. After conquering the web-search arena, it has in quick succession expanded into other major areas of the Internet. With a goal to be the index of the worlds information – Google has expanded into other areas of the on-line world with an almost frightening speed. In my mind it started out with Google News, then Gmail, Google Maps,Froogle, Google Toolbar and Google Desktop. Now the products are coming out furious pace – Google Earth, Google Finance, Google Video, Google Talk, Google Local, Google Calendar, Google Reader, Google Spreadsheets, Google Pack… They have not been shy in acquiring products either – Blogger, Orkut, Picasa to name some…
Despite the seeming explosion of product launches, however, Google always seems to bring something different or better into its products that set it apart. Sometimes they miss -eg Froogle, Google Accelerator – but more often they revolutionize the domain they are in. Gmail with the 1GB mail limit and viral advertising, Google Maps with its AJAX implementation and open API or Google Desktop with its speed in searching users computer hard drives.

They (Google) have created a portal for their products in their home page – You can create a personalised version of the Google home page that includes many of their on-line products… I just realised as I am writing this – Google is the modern, cooler version of Yahoo!!

Hm-mm…. Yahoo has been on a re-designing spree lately – maybe I should check it out… But that’s for another post.